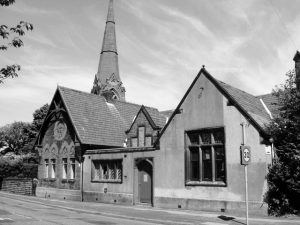 The Scoolroom was built in 1844 by Thomas Greenall as a much needed infants’ school in a rural area, with a small grant from the National Society. In 1872 it was extended and its status changed from an Infant School to a Mixed School, having the services of both a master and a school-mistress. As Mr. Forrest writes in his book ‘The History of Wash Lane’ (1992) the extension was embellished with ornate barge-boards, at the apex of which was a cross. This cross had a hole through the end of each arm with a fifth hole at their intersection. These holes, it is believed, represented the five wounds inflicted on Christ as his crucifixion. The building was further extended in 1882.

Records of the school started in 1876 when it was a mixed and infants school. In 1877 the two schools were separated and in that same year the school had to be closed many times due to flooding from the river in Wash Lane.

Wash Lane Schoolroom continued to be used as a school until 31st March 1913 when the last pupils left to attend the newly opened Boulton School in Reynolds School. The girls were the first ones to leave in 1908 and the boys left in 1913.

The schoolroom has always played a vital role in the social life of the community of Latchford. It has been used for community meetings, band rehearsals, parties and many other activities. Miss Maud Anderton used the main room for ballet and dance classes from 1949 until recently when the Anderton School of Dance was moved to other premises. Christ Church has used the building for parish activities of all sorts.

In 1986 the building was further redeveloped with the inclusion of additional meeting rooms, toilets and a kitchen.

For many years members of the parish have spent much time and energy renovating, maintaining and redecorating the schoolroom.